The Black Pig:  'The Aunger Years'

In 2013 I was contacted  by Marina Aunger. She informed me that she had newspaper cuttings / family photos / recollections of the Black Pig between 1973 and 1986. - This being the period during which the pub was owned by her parents, Phillip and Barbara Aunger.

The majority of the photos were poor quality / low resolution, but they represented a unique opportunity of capturing a slice of the pub's history, so I scanned in each one.  Similarly, many of the newspaper cuttings were faded / indistinct.

I have digitally enhanced all of the material and although still fairly grainy, I have used it to create this section of the staple-online web site. 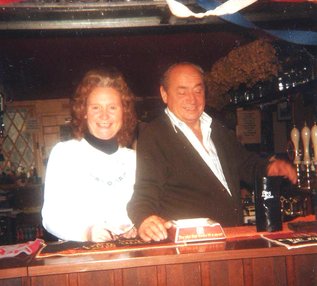 Over the years every owner / tenant / manager has made his/her mark on The Black Pig. But none more so than Phillip Aunger.

When Phillip and his family moved into the Black Pig in 1973 it was in need of some major up-dating /repair / renovation.

During the Aungers' occupancy of the Black Pig (1973-1986) they totally transformed it.

'The Aungers' comprised Phillip, his wife Barbara, their son Phillip Jnr. and daughters Karen and Marina.  - Phillip was often referred to as "Mr Phillip, the Squire of Barnsole"!

Back in '73 pubs were pubs and restaurants were restaurants, and the Black Pig became the first pub in the area to sell food.

Before becoming the new owner of the pub, Phillip worked for a company specialising in renovating licensed premises, so he was ideal person for the task.

*  Stripping back the roof and strengthening the beams / timbers.

(The old double doors of the brewery can still be seen today, outside the building).

*  Demolishing the existing Ladies and Gents toilets.  (Which were situated in separate buildings, to

the rear of   the main building).

*  Building a new toilet block for the Saloon Bar and Restaurant.

*  Creating a Beer Garden.  (Clearing / levelling the area adjacent to the Public bar, laying lawns and

*  Adding external access to the Beer Garden (from the main road).

*  Adding access doors to Beer Garden (from the Public Bar).

Table. (The first in the area).

*  Totally re-decorating the exterior of the building.

With Phillip and Barbara at the helm, the Black Pig quickly became the hub of the village.

Phillip and Barbara would regularly invite the local hunt (West Street Hunt)  along to the pub.

The Black Pig-sponsored events raised money for a Riding for the Disabled charity.

Although the Cocktail Bar, Steak Bar and Sporting Club  have long since gone, the Aungers' legacy is still very evident today:  When you open the little gate and stroll into the tranquil Beer Garden / when you use the recently refurbished large restaurant / when you use the Public Bar's garden access or even just go to the loo - you are making use of facilities provided by Phillip Aunger.

From 'The Aunger Years'