The Cousens/Couzens/Cozens family lived in Staple from 1794-1891.

The name of Cozens using various spellings appears on old documents in and around Staple a hundred years or more before the marriage of my great, great grandparents at St James Staple on 26 July 1794.

Edward Cousens was about twenty one years of age when he married Sarah Ralph, she was probably just a year younger than himself.

After the marriage, they set up home and produced a family of twelve children, eight boys and four girls, between the years 1794 -1823.

They were already living at The Groves at the time of the 1841 Census Return, Edward Cousens shown as a market gardener. He died on 15th September 1844  but Sarah lived on in the family home until her death 20th September 1863. 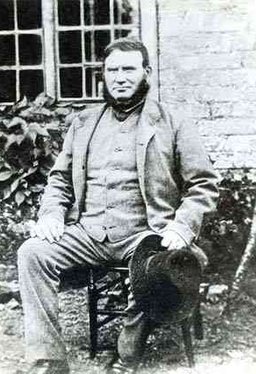 Of the daughters of this marriage, Sarah married John Sawkins of Nonnington and  Mary married John William Friend in January 1842, he was a schoolmaster at Staple at the time of their marriage.

James Couzens became head of house and head of the family firm on the death of his father.  His younger brother, George (my great grandfather) eventually became a partner in the enterprise and after the death of James he took over control of the business.  Apart from the freehold property of The Groves there was also rented farmland at Barnsole, so that in the 1871 census, George Cozens was shown as a farmer working twenty six acres of land.

Twice a week a horse and cart took produce to market in Dover. George Cozens excelled with soft fruits, He had a gooseberry named after him "Cozens Seedling", the abundance of fruit was very sweet but small, excellent for jam making, unfortunately the bushes were so covered in prickles, thus the variety was not commercially viable. For a year or two he won First Prize in the All England Shows for wall grown peaches.  Part of the walled garden at The Groves probably still exists, also the old Dove Cote.

George Cozens was a giant of a man, at least 6ft 4ins in height, with a chest measurement of 56 inches and a weight of at least 26 stone. Family stories tell of him as a smuggler in his younger days carrying a keg of rum on his shoulder as he made his way home from the coast.  There used to be a family photograph of two men of Staple standing together wrapped in his waistcoat.

He died 7th March 1891 after three or four years lying bedridden, following a stroke. He was buried in St James churchyard next to his parents, none of his three wives have their names on the headstone.

George Cozens had six daughters and two sons from his three marriages.  By his first wife, Elizabeth Hills he had two daughters, Mary Ann who married Charles Kennard a hatter of Margate and Elizabeth who married Walter Luckhurst, ironmonger of Walmer.  Elizabeth Cobus, the second wife, produced Catherine Jane who eventually took over the running of the market garden after the death of her father.

No account of her marrying has ever been found.  Lucy married John Henry Luckhurst, ironmonger of Wingham, brother of Walter Luckhurst.  My great grandmother Amelia Brisley of Ash married George Cozens in 1863, she was 23 years of age at the time and he a widower, twice over, aged 46 years. They married at St Annes, Dean Street, Soho, London, with only Brisley names as witnesses.  Amelia Brisley's  mother  Ann's maiden name was Cousens and she was born in Staple in the 1790's,  the actual relationship between bride and groom is not clear. The marriage only lasted for six years as Amelia died shortly after the birth of her fourth child Edward when she was only 29 years old.

The family gravitation towards gardening continued with William who eventually became head gardener at Abbotts Langley  a large mental hospital in Hertfordshire.

After the death of his father, my grandfather John left the family home and business to start a market garden in Minster, Thanet.

Although he did not continue with this venture for long after his marriage; he worked as a fruit foreman in other parts of Kent until his retirement. He was a gardener all his life passing on his skills to his sons in their turn.

Of the other two children of this last marriage Louisa became postmistress  at Ash probably after 1900.  Edward grew up to become village policeman at Ash.  How long any other members of the Cozens family remained in Staple, is not known.