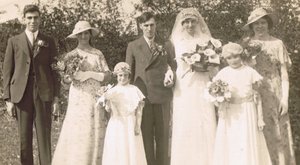 In December 2009 I received a call from a Mrs Joiner, informing me that she had a unique collection of memories, artifacts and photo's relating to her late husband's life in Staple (Her husband was Bill Joiner)

There later followed a lovely letter and a parcel of goodies, which included ration books, certificates and old photographs.  I've reproduced some of Mrs Joiner's letter on this website and have also scanned in and displayed many of the old photo's.

These pages are not intended to be a history of the Joiners, a history of Flemings House or anything similar:  They are merely a collection of fascinating facts and photo's from Staple's past.

I am so pleased that Mrs Joiner decided to both share these memories with me and also to donate the collection of photo's.  I hope that you enjoying looking at them, too.

........  a lot of memories of my years in Kent have surfaced now and I will share with you those which might help you.  A lot of my knowledge of Barnsole and the Joiner family is basically 'gossip', going back to other people's recollections.  Bill, my late husband, was born in 1906 and he had clear memories of his Grandfather and Grandmother and the way they ruled their family..............

In 1983 I was allowed access to some papers relating to Flemings House, held by Emmerson, Barnes & Brown, Solicitors of Sandwich.

The earliest was the Last Will & Testament of Mr Read (possibly John - memory unsure), dated 1504.  He refers to 'My house at Read's Hill' and 'six acres of surrounding land'.

My husband remembered the hill down to Barnsole being called Read's Hill.  During the time (53 years), in which he lived at Flemings House, some authority, perhaps the GPO, renamed the road and the house.  Perhaps this was at the introduction of Post Codes.

I have seen an old Ordnance Survey map, on which the house is named Read's Hill House.  The l;ocals always called it "Dodger's".  A man known as 'Dodger' Millgate lived there for many years, until the midle of the 1920s.  My late husband's father acquired it and altered it to house two of his farm workers and their families.

The main legatee was his unmarried daughter, who had obviously lived with him.  There was no mention of a wife, so presumably this lady 'kept house' for her father.  There was also a maidservant, of long service, who remained with Miss Read. (Their names were Mary and Ann, although I cannot recall which was which).

Another Daughter, Catherine, is also mentioned in the will.  She was married to a man who lived in Sandwich and at the time had a family of young children.  Mr Read obviously disliked, distrusted, and generally disapproved of his son-in-law.  His will (I'll never forget this bit!) leaves his son-in-law £100. 'Which being the sum he oweth me doth clear the debt.'  He tried to ensure that the small amount he left to Catherine went solely to her, and not to her husband. ( Which must have proved difficult, given the laws of the time).

Miss Read seems to have been more sympathetic to her sister than her father had been, but shared his disapproval of her brother-in-law.  The will also revealed to me the existence of another brother, Isaac, who seems to have had two sons. obviously older than Catherine's brood.  There was a bequest of £100 to the maidservant, and the rest of the estate was left to her nephews and neices (Isaac's two sons and Catherine's six or seven children).

Later documents revealed more of the family affairs.  John Read, Isaac's younger son, seems to have been a competent business man.  He first bought his brother's share of the Read estate, then he bought out all his cousins (most of whom were still minors).

Explaining Isaac and His Sons

Comparing this family with that of a contemporary of Bill's I can imagine a similar situation.  This gentleman, prosperous owner of a largish farm, who when he felt ready to retire, handed it all over to his son.  He himself retired to a small house with several acres of land a few miles from his son.  There he lived with an unmarried daughter to keep house for him, and 'mini-farmed' the land.  I remember him going to Ireland to buy bullocks for rearing/fattening.  This sort of arrangement seemed to be regarded as normal and ordinary.

Flemings House - its Layout and its Otbuildings

It seems to me that the first mentioned Mr Read built the Georgia wing on to the existing farm house.  Certainly his pride in it shines out of his will.  My husband said that the bricks were made at Hammil. They are much smaller than modern bricks, around 6" x 3" x 2". (I've got one!).

The existing farm house was a thatched building, certainly the outbuildings were thatched.  In 1926, when Charles Joiner bought it, it was in a very poor state.  He had the 'old' part pulled down, and a much lower, two storey extension built on.  He employed a builder from Sandwich, called 'bodger' something or other. (That says it all!)  Second hand bricks were used.

There had been a range of farm building, facing more or less North, including what Bill said was the dairy.  In 1983 there was a large, wooden barn where Bill garaged the car and the lawnmower etc.  There was also a collection of small, obsolete equipment from its days as a farm.  Lots of wicker containers in various sizes (half bushel, bushel, peck etc), and sundry mysterious (to me) tools and gadgets.  Beyond the barn was the remains of a stabling:  a cobbled yard, stables with stalls for three horses - roofed then with corrugated iron, but the pitch of the roof indicated that it had formerly been thatched.

The 1926 extension had two kitchens in the ground floor, and four small rooms upstairs.  A second (steep and narrow) staircase had been built, so that two families could be housed.  Partitions had been stuck in as necessary, to divide the house.  No 'Planning Department' in local government in those days!

The two small kitchens had been opened up into one "long kitchen at one end - living room at the other" type of room by Bill and his first wife.  On their marriage in 1936, Charles allocated them half of the building but later, when the other family had moved out, Bill persuaded his father to let them have the whole place.

Incidentally, there were no beams in the kitchen ever. (You know "olde-worlde oake beames').  After we left a new owner put some in.  The latest owner has probably taken them out again.