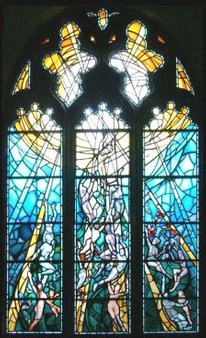 Staple Church has a stunning 21st century designed 3 light stained glass window in the south wall of the Nave.

The Pilgrimage Window, designed by Buffy Tucker and made by her and other craftsmen at the Cathedral Studios at Canterbury Cathedral was installed in November 2007 as a gift to the church by Mrs Burges in memory of her husband Roger Burges who was organist at St James at the time of his death in 2005 and had been involved with the music and choral singing at the church for many years. It was dedicated by the Archdeacon of Canterbury Ven Sheila Watson at a service on 9th December 2007.

St James the Great is the Patron Saint of Pilgrims hence the theme of Pilgrimage, but the artist has chosen to depict the soul’s spiritual journey to heaven – the parallel journey to that of our bodies in pilgrimage, which she felt to be more uplifting imagery than the comparative heaviness of corporeal striving, with the figures conveying spiritual joy as the souls climb towards the light.  The naked souls’ journeys are intended to be perceived as weightless flight, or swimming under water; drawn inexorably towards their heavenly goal. However, the sometimes twisting body positions parallel the struggles we face in our own travels through life

Among the souls there are butterflies, symbolising the transience and delicacy of the human condition; a tribute to God the creator.   While it celebrates the soul’s release and journey to heaven the window also shows the beauty of the natural world around us in this life.

The design also includes a reference to music, an important part of the human expression of devotion. Curling upwards with the souls is music by Edward Elgar from his oratorio ‘The Dream of Gerontius’; that sung by the angelic choir as Gerontius’ soul approaches heaven.

There are also several prisms incorporated in the white part of ‘heaven’, casting rainbows into the church interior when the sun shines.

In the bottom right hand light, amongst the more struggling figures, are references to medical science with symbols of some chemical elements and the organic molecule amlodipine (Istin). Mr Burges, as a pharmaceutical scientist, was a key figure in the discovery and development of this medication for angina and high blood pressure

The Church has a fine lychgate which bears the date 1664. (Although many believe it be some 200 years older).

The ornately decorated, octagonal font was specially made for the church somewhere in East Anglia in about 1480.  On one of the panels is the carved figure of St. James.  The other panels show symbols of the four evangelists, alternating with two of angels and one representing the Holy Trinity.

The tower door is flanked by old stone seats, once used as pews by the elderly or infirm. (Who 'went to the wall').  The capitals here are re-used, dating from Norman times.  A Saxon window was discovered in the tower's East wall in 1892, but remained un-blocked until re-discovery in 1959.

The clock is one-handed, showing the hours only.  It was given to the church in 1789 by Lady Lynch of Groves.  The clock was second-hand, having been used elsewhere, and was made long before 1789.  Plans to fit an extra hand in 1864 were never carried out.  The clock fell into disrepair before World War II.  After appeals for funds, clock expert Bernars Hawkins and his son restored the clock to working order free of charge.  The clock received a new dial in 1961.  Ken Smith designed and manufactured an electrified winding mechanism for the clock, and this was officially brought into service by the (then) Bishop of Dover, the Rev. Richard Llewelyn in July 1993.

The bell tower houses one of the oldest bells in Kent: (The number three bell, which was made by Richard Hill of London sometime between 1423 and 1440).  Number four bell dates from 1623 and was cast by Joseph Hatch of Ulcombe, whilst numbers one and two are a mere three-hundred years old.