History of The Frog & Orange 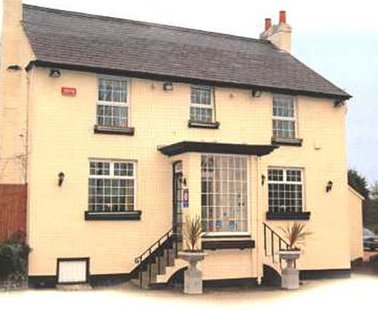 The Green Man was built in 1728, in the reign of George 2.  It was originally a farm dwelling and comprised a main tenement with stable, outhouses, barn, hopgrounds, 9 acres of land with 1 acre of wooded land.

It was part of the possessions of Christopher Ernest Kien, of Kensington Palace, a lieutenant colonel of the Horse Guards, who possessed certain estates, the manor of Polton and the hamlet of Shatterling in the parish of Staple.

Not long after the house was built he leased part of his estate (including the house) to the Honourable Richard Ingoldsbey of Grosvenor Street, London.  He subsequently re-leased this property to Abraham Larkins, a farmer of Staple.Christopher Ernest Kien died in 1744 and passed his estate, by the terms of his will, to his widow, Jane.  She, in 1758, leased the house and part of her estate to Sumuel Joynes Esq. of London.  In the same year he granted an extension of lease upon the house and its land to Naomi Larkin, widow of Abraham.

Jane Kien died in 1762 and passed her estate, by will, to Evert George Cousemaker Esq. Of Westminster.  However, he had little benefit from his bequest, for he died in the following year, whereupon his estate passed to his wife Mary, the daughter of Gervas Hayward, merchant and mayor of Sandwich.

Not long after the death of her husband, Mary Cousemaker married her second  husband, Sir Thomas Pym Hales, Baronet of Howletts in the County of Kent, whereupon he became possessor of the house and her estate.  At this point the house was occupied by the widow Larkin, who is described as her husband was, as a farmer.

Sir Thomas Pym Hales died in 1773, and his estate reverted to his wife, Dame Mary Hales.  She died in 1788, and her estate passed to her only son from her first marriage, George Kien Hayward Cousemaker, who is described as a Captain in His Majesty's Foot Regiment of First Guards.

At this date, one Joseph White, gentleman of London, was tenant of his estate, whilst the house was in the occupation of Jacob Larkins.

George Kien Hayward Cousemaker married the Honourable Catherine Southwell, daughter of the late Edward Lord de Clifford, to whom the estate passed in 1794 upon the death of her husband.

She passed it by will in 1797 to her son George.  He possessed it until his death in 1820, whereupon it passed to his daughter Sophia.

At this date (and for some years prior) there had been an ale house adjacent to this property, called the Green Man, which had once been part of the same estate, but at some time had reverted to Gervas Hayward, Mayor of Sandwich.

There had occurred an infringement of the licence of that house and for some time the heirs of Gervas Hayward had petitioned to close it.  Upon the achievement of this, a clause was written stating that the property should never be used as an ale house, and it never was again.

In 1820, the house was occupied by Filmer Larkins, farmer and son of Jacob.  He, with the consent of the estate and two justices at Sandwich, was granted a licence to sell ales from the premises, which at the hearing he registered as The Green Man.

In 1826 he was granted a full licence, and The Green Man became a registered tavern. The Green Man at this date was in the possession of Sophia Russell, daughter of George Cousemaker, and her husband John who was a captain in the Royal Navy.  They held the estate, along with the most noble Henry Charles, Duke of Beaufort, Knight of the most noble Order of the Garter, and Francis Russell, the Marquis of Tavistock.

Though from this point other heirs and co-heirs became entitled to parts of the estate, and there followed lengthy arguments at law, which culminated in 1830 when Sophia Russell, then the Baroness de Clifford, petitioned Parliament; an act was passed amending the laws respecting conveyances and surrender of estates and funds vested in trustees and mortgages.

Among those heirs were the family of Dyneley who had been granted the estate by Henry VIII, in 1530.

In 1841 Sophia Baroness de Clifford, the noble Francis, Duke of Bedford and Robert Hale Blagden Hale sold the Green Man 'with its land and all appurtenaces' to John Dadds Esq. Of Wingham.

However, he in the same year accepted the promisary note of  George Collard , victualler of Staple, for the sum of £450 for the Green Man, that it became payable over a period of time with interest. (Certain amounts of which remain unpaid to this day).  George Collard kept the house until his death in 1863, whereupon his widow Clara sold it to the Gardner Godden Brewery of Ash-Next-Sandwich.

The first tenanted keeper of the Green Man was Thomas Wyborn, a market Gardner, who during his time there carried on that business as well as the day to day running of the house, as did others that followed him.  In 1951 the Gardner Brewery merged with Thompson & Wotton of Ramsgate, to form Combined Brewery Holdings, which in 1955 was taken over by the Whitbread Brewery. They in 1972 sold it as a Free House.