( From  an article in Kent Online)

Pensioner tells how she was imprisoned by Nazis, performed in front of Hitler and escaped to Staple, 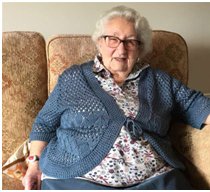 A 98-year-old woman has told how she was imprisoned by the Nazis, performed in front of Hitler and escaped to England.

Waltraud Hollman, an accountant and opponent of Nazism, took a risk that almost cost her life in December 1944.

To the people of Berlin, it had become clear their country would lose the Second World War.Waltraud Hollman, 98, at home in Staple.

Asked by a fellow anti-Nazi to distribute illegal leaflets calling on Berliners to rebel against their government and stop the war, Waltraud agreed.

But her act of rebellion was spotted by the ever-vigilant Gestapo. Two Nazis stormed into her office to arrest her as a “traitor and saboteur”.

Sitting in her quiet lounge at home in Staple, near Canterbury, the great-grandmother of nine recalls how resistance to Nazism was an act of treason – punishable by death, often by guillotine or firing squad.

After Waltraud’s arrest and with no official charge or court trial, she was taken to a prison in Stendal, 65 miles from Berlin, and locked in a cell with six other women – all incarcerated for different crimes.

There were two beds in the small cell and the other prisoners had to sleep on mattresses on the floor. They used a bucket as a toilet, which was emptied in the morning. 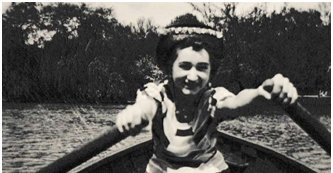 Waltraud Hollman as a youngster boating in Germany.

Waltraud said: “You had dinner, usually soup, which had maggots floating on it already. But we were all hungry so we ate it.”

She had no idea what her fate would be. There was an ever-present risk of bombs being dropped on the prison by the Allies.

In a lucky turn of events, the Ninth United States Army liberated the prison in April 1945 and Waltraud was released.

Born Waltraud Fischer on May 14, 1921, she grew up in Wilmersdorfer Straße, Charlottenburg, in Greater Berlin and lived through the rise of the Third Reich. 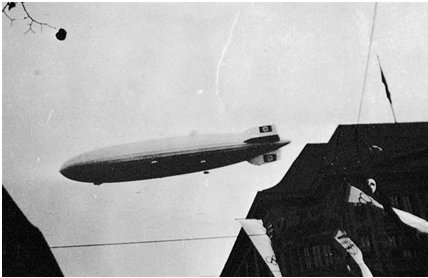 Waltraud Hollman's picture of a Nazi Zepellin during the 1936 Olympics

Waltraud belonged to a sports club when she was 14 but was forced to join the League of German Girls – the girls’ wing of the Hitler Youth – and was a member for a couple of years.

She even performed a gymnastics routine in front of Adolf Hitler at the 1936 Summer Olympics opening ceremony.

Her mother hated that she was in the youth movement, and so did Waltraud, but she said: “I had to laugh at it, I didn’t take it all that seriously.”

Nor did she take politics very seriously at a young age, but that changed during November 1938.

Waltraud recalls being woken by loud smashing in the street outside her home.

She looked out of the window and saw the Sturmabteilung (the original Nazi Party paramilitary) smashing windows of Jewish shops and stealing from them.

On another occassion, Waltraud and her family helped a Jewish mother and her baby escape persecution by hiding them in their home. 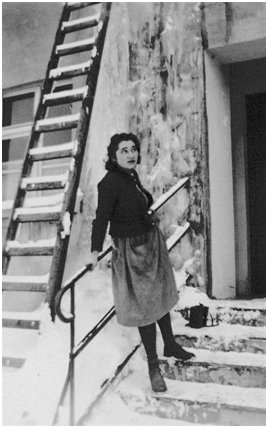 Waltraud Hollman took part in the resistance against the Nazis

She looked out of the window and saw the Sturmabteilung (the original Nazi Party paramilitary) smashing windows of Jewish shops and stealing from them.

On another occassion, Waltraud and her family helped a Jewish mother and her baby escape persecution by hiding them in their home.

One of her father’s customers had been caught out after 8pm –breaching a curfew imposed on Jews by the Nazi regime – and went missing.

The customer’s wife was afraid to go to her house with their baby, so Waltraud’s family hid.

Waltraud said: “The trouble was that every time there was an air raid, we had to go in the cellar and we were afraid to take her.

“Then one day she went out. We told her to be careful. She went out with the baby in the pram and we never saw her again.”

When the war ended, Waltraud returned home and secured a job.

Benjamin Hollman, who had arrived in Berlin that day and been demobilised from the British Army a week before, approached her and they started talking.

On the first day of that encounter, Benjamin saw a lorry mount the pavement, kill an elderly lady and drive off.  From that moment, he knew he had to rescue Waltraud.

There was only one bridge to leave Berlin and travel to West Germany. But it was being repaired so nobody could cross it.

Waltraud failed to pass the medical examination to leave the country as she was diagnosed with tuberculosis and a collapsed lung.

After what Waltraud called “a little bit of fiddling” on the British side, she obtained a passport, which allowed her to visit England for three weeks. 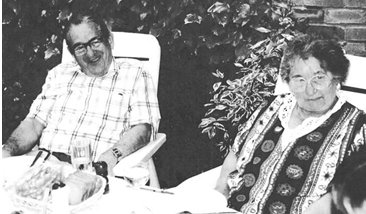 She arrived on July 1, 1948, and went to the registry office with Benjamin, but had to wait a fortnight for a marriage licence and then a further week to get married.

On June 21, the day she was supposed to travel to Germany as her passport was due to expire, Benjamin and Waltraud married at the Maidstone Registry Office.

The couple lived in Kent for the rest of their lives, at various addresses, and had two children – Barbara and Michael.