n.b. I have retained the ‘curious’ spelling of the original document.  E.g.  ‘antient’ (ancient) 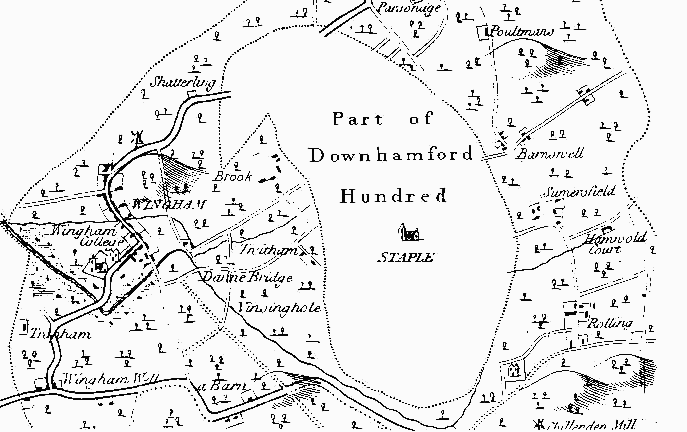 The parish of Staple north-eastward from Adisham, from which and the left of the hundred of Downhamford, it is separated entirely by the hundred and parish of Wingham intervening.

The manor of Adisham claims over this parish, and at that court a borsholder is chosen for the borough of Staple, which extends over the whole of the parish.

The Parish, which is but small, lies in a pleasant healthy country, mostly on high ground.  The soil near the village, and towards the stream, is very good corn land, but towards the southern part it is rather poor, and much of it chalky.

The village, called Staple-street, consists of about ten houses, having the seat of Groves, and the church near adjoining.Beyond which the parish extends into the vale eastward, as far as Durlock bridge, on the stream which rises at a small distance from it, and runs from hence to Denne-bridge into the Wingham stream.

On the high ground, on the opposite side of the valley, is the hamlet of Shatterling, built on the high road leading from Canterbury through Wingham, towards Ash and Sandwich, where the soil becomes very poor, and a deep sand,  up to which road the park grounds of Grove extend.On the opposite side of the parish is Crixall house, once a gentleman’s seat, but now diminished to the common size of a farm-house.

Near it is a piece of healthy ground, called Crixall Rough, with a noted toll of threes on it, a conspicuous object to the surrounding country.  There is no woodland in the parish.  A fair is held here on the 25th of July for toys and pedlary.

Groves is a mansion in this parish, which in early times was the residence of a knightly family called Grove, who in antient deeds were sometimes written as Grove, in which it remained till the reign of king Henry VI, when it devolved by descent to Sir John Grove, who was a great benefactor to the church of St. Peter, in Sandwich, where he lies buried, under a monument, with his effigies at full length on it, and his shield of arms at his side, the bearing on which has long since obliterated.Soon after which this seat was carried, by a female heir, in marriage to one of the family of St. Nicholas, in which it remained, but a small time, for about the latter end of King Edward IV, it was alienated to Quilter, in which name it remained till the middle of Queen Elizabeth’s reign, when Christopher Quilter, gent, alienated it, together with his interest in the lease of the Manor of Down-Court, the inheritance of which belonged to the master and fellows of St. John’s college, in Cambridge, to Simon Lynch, gent, of Sandwich, whose family was settled at Cranbrooke, in the reign of king Henry VI, as appears by several of their wills in the Prerogative-office, Canterbury, and was the first of them who removed to Sandwich, which he represented in parliament in Queen Mary’s reign, and afterwards to this seat of Groves, on his purchase of it, and added much to the buildings of it: in whose descendants, who resided at Grove, and were buried in the Grove chancel in this church.

This seat continued down to John Lynch, esq. Of Groves, who was colonel of the militia, and kept his shrievalty in 1714 at this seat, where he died in 1733, having married Sarah, daughter of Francis Head, esq. Of Rochester, who died in child-bed of her nineteenth child in 1710.

Of them, there survived to maturity only two sons and five daughters, the former were John and George, the latter of whom was M.D. of Canterbury, of whom more will be mentioned hereafter, under Ripple.  John Lynch, the eldest son, was of Groves, and was S.T.P. and among other preferments became dean of Canterbury.  He died in 1760, and was buried in the Groves chancel.

He married Mary, youngest surviving daughter of archbishop Wake, by whom he had two sons and five daughters, viz: William, of whom hereafter; John, L.L.D. now prebendary and archdeacon of Canterbury and unmarried, Ethelreda, married to Thomas Hey, A.M. rector of  Wickham Breaus; Sarah, to William Tatton, D.D. prebendary of Canterbury and York; Mary, to sir Thomas Hanham, bart. Catherine, first to Henry Knight, esq. And secondly to John Norris, esq. and Hester-Elizabeth, all since deceased.

William Lynch, esq. the eldest son, resided at Groves, served twice in parliament for the city of Canterbury, was made a knight of the bath, a privy counsellor, and envoy extraordinary to the court of Turin.

He married Mary, eldest daughter and coheir of Edward Coke, esq. Of Canterbury, by whom he had no issue.  He bore for his arms, sable, three lynxes rampant, proper.  To which were granted supporters, Two lynxes, proper.Sir William Lynch made great improvements to this seat, building two wings to it, and adding an entire new front of stucco to the whole; besides which, he made extensive plantations and new laid out the grounds adjoining, in the form and stile of a park.In the house is a small, but valuable collection of good pictures.

Sir William Lynch died abroad in 1785, possessed of this seat of Groves, together with the lease of the manor of Down court. And by will devised them, with the rest of his estates, to his widow lady Lynch, who is the present owner of Groves, at which she resides, and is the present lessee likewise of Down-court.The Manor of Crixall, or properly crick/hall, and in some antient deeds written Crick-leadhall, is an estate in the southern part of this parish, which had once the family of Brockhull as proprietors of it, and they possessed it till the 28th year of king Edward I, and then it was settled upon a daughter of it; but whether she carried it by marriage or not to Wadham, a family which I find were possessed of it about the latter end of Edward III.’s reign, cannot be discovered.

However that be, William Wadham, as appears by an antient pedigree of the family of Fogge, lived in the reigns of king Henry IV. V. and VI. during which he was a justice of the peace for Somersetshire, and was possessed of this estate, which he left to his son and heir Sir Nicholas Wadham, whose daughter and heir, about the reign of king Edward IV, married Sir Wm. Fogge, and entitled him to the possession of this manor, which he left to his son Sir John Fogge, of Repton, in Ashford, comptroller and treasurer of the household to king Edward IV. and a privy counsellor.

He died in the 6th year of king Henry VII. Anno 1490, and by his will devised this manor to his son Thomas Fogge, being his only son by his second wife.

He was afterwards knighted, and was sergeant porter of Calais, in both the reigns of  king Henry VII. And VIII. In the fifth year of which latter reign, he alienated this manor to Ralph Banister, from which name, before the reign of queen Elizabeth, it passed by sale to Tucker, one of whose descendants sold it to Omested, and John Omested, at the latter end of that reign passed it away to William Smith, who in king James I’s reign alienated it to Dr. Martin Fotherby, prebendary of Canterbury, and afterwards made bishop of Salisbury.

He was son of Martin Fotherby, of Great Grimsby, in Lincolnshire, and younger brother of Dr. Charles Fotherby, dean of Canterbury.

He died in 1620, and was succeeded by his son Thomas Fotherby, esq. of Crixhall, who left one son Thomas, and a daughter Pricilla, married to William Kingsley, esq. of Canterbury, the eldest grandson of archdeacon Kingsley.Thomas Fotherby, gent. the son, resided here, and died in 1710.  Upon which it came to Anthony Kingsley, esq. of Lymington, and afterwards of Canterbury, where he died in 1786, and his infant son, of the same name, is now, by settlement, entitled to the inheritance of it.

A court baron is held for this manor.There was a family of the name Omer, called likewise Homer, which had constantly resided in this parish, their mansion being in Staple-street, for upwards of four hundred years, as appears by old court rolls  wills, and other evidence. (several of their wills are in the Prerog. Off. Canterbury).  The last of them who resided here, was Laurence Omer, gent. who died about the year 1661, leaving an only son Charles, who died unmarried; their burial place was in this church-yard, and there are now two of their tombs remaining there, one of which is much adorned with sculpture, but the inscriptions are nearly obliterated, only there can be read on the latter, the name Omer, alias Homer.There are no parochial charities.

The poor constantly maintained are about thirty-four, casually twenty.This parish is within the ecclesiastical jurisdiction of the diocese of Canterbury, and deanry of Bridge.The church, which is exempt from the jurisdiction of the archdeacon, is dedicated to St. James, and consists of two isles and two chancels, having a tower steeple at the west end, in which are four bells.  The church is remarkably long and low.  The fourth isle and chancel are upon the same level, nor is there any separation between them.  On the sides of the chancel are rails, very low, about two feet from the wall; very unusual.

In the north isle is a vault for the family of Terry, in which the late Terry Marsh, esq. of Canterbury, who died in 1789, is buried; and on the pavement are several memorials of them.  The font is ancient, of stone, an octagon, with emblematical carved figures.  The north chancel is the Groves chancel, having a circular roof, adorned with painting.  One half of the east part of it was made into a vault by dean Lynch, for himself and family, in which himself, his wife, Sir William Lynch, K.B. his eldest son, Mrs Tatton, her husband and son, and his youngest daughter Hester-Elizabeth, lie buried.In this chancel are several monuments for this family.

In the east window of it are the arms of Lynch, with quarterings.  By some small remains in the window there seems to been good painted glass formerly in them.  In the church-yard are several tombs for the Terreys; and two for the Omers, as has been mentioned before.This church was always accounted as a chapel to the church of Adisham, and continues to at this time.  It is such valued with that church in the king’s books.  There is now a vicarage-house and some glebe belonging to the rector of Adisham, as vicar of it.In 1588 here were communicants one hundred and forty-eight,  and in 1640 the same.