You Tube Video of a Turtle Dove

It was a strange start to the season, with an astonishing seven Turtle Doves seen on the sanctuary on April 27th

Wet and windy weather then followed and Turtle Doves weren’t seen or heard for nearly a week.

However, with the warmer and calmer weather,  at least four males were heard calling near to the sanctuary;  and courtship behaviour was observed on the sanctuary and in flights; with three Turtle Doves chasing around, with a male trying to muscle in on an existing pair.

In the last week Turtle Doves have been heard on the sanctuary every day; but no more than four at any one time yet.

The hedge behind the hide is ‘House Sparrow city’!

Evening visits by Foxes, Badgers and many Rabbits are picked up by the sanctuary's trail cam.

R.S.P.B supplementary feed is being enjoyed by the Turtle Doves; but inevitably devoured mostly by Wood Pigeons and Collared Doves!

May 2020:  This early visitor is enjoying some fumitory that was over wintered in a greenhouse before being transferred to the sanctuary

The turtle dove (scientific name Streptopelia turtur) is the UK's fastest declining bird species and is on the brink of extinction.

A small and pretty pigeon, it breeds in lowland England and winters in Sub-Saharan Africa. 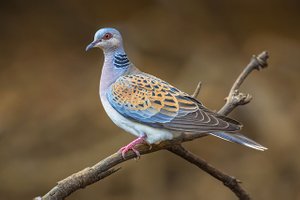